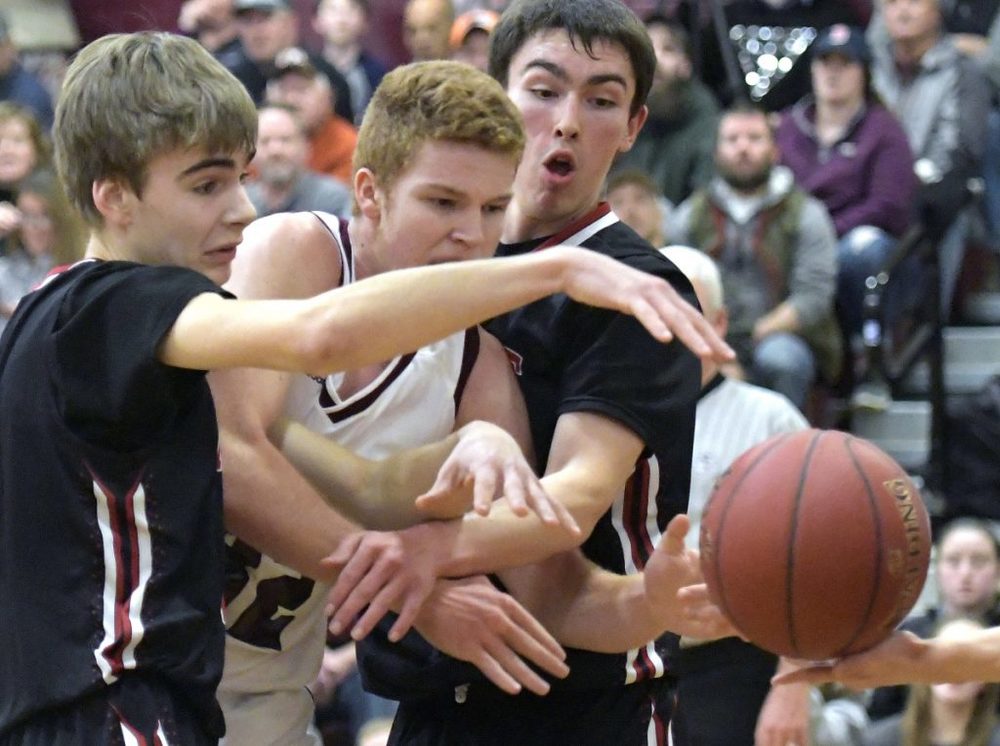 On Wednesday, he got his answer. And a resounding one at that.

Alec Byron scored 24 points to lead a balanced cast and guide the Bulldogs to an emphatic 82-59 victory over Richmond in a matchup of Class C South’s first- and second-place teams at Richmond Middle/High School.

“I thought we responded pretty well. It’s important to have a short memory,” said Ranslow, whose team improved to 13-1. “We really focused on moving to our next opportunity, and that was against a good club, second in the (Mountain Valley Conference), second in Heal points. And really, (it was) an opportunity to come out in hostile territory, a great environment, nice hot gym, and execute.”

The memories may have been short, but the Bulldogs knew there was a little more on the line — due both to the loss to Dirigo on Saturday and the Bobcats’ looming presence in the standings.

“Definitely. The crowd was great, fans from both sides were really loud,” said Byron, who scored all but two of his points in the first three quarters. “After the loss against Dirigo, we knew that this was probably our biggest game of the year.”

Richmond fell to 11-3, despite getting 29 points from Zach Small and 16 from Matt Rines.

“(They’re) fast, athletic,” coach Phil Houdlette said. “You miss a couple of shots and you send them to the free-throw line … it’s going to spell disaster.”

It didn’t at first, as Hall-Dale took a 20-16 lead after the first quarter. But 10 points from Ashtyn Abbott (22 points) and eight points from Byron helped the Bulldogs to a 43-33 halftime lead, and Hall-Dale began the third quarter on a 9-2 run to push the advantage to 52-35 with just under five minutes to go in the third.

“I think, if you’ve watched our club a lot, we tend to get out (like) a couple of prizefighters feeling each other out,” Ranslow said. “And then we begin to kind of see what they want to do, and we begin to try to take it away slowly, possession by possession.”

Richmond had life left, with Small — who scored all 13 of the Bobcats’ points in the third — burying back-to-back-to-back 3-pointers to suddenly cut the lead to 55-46 with 2:25 left and re-ignite the crowd.

It was a final gasp, however. Hall-Dale scored the final six points of the quarter, then the first six of the fourth to put the game out of reach. The Bulldogs also kept Rines, red-hot in the first half, off the board in the second.

“I think if we can keep it anywhere around 12 and under with three or four minutes left, we’ve always got a shot,” Houdlette said. “But I also think they wore us down. They play a lot of kids, they play up-tempo, and we really have to have (Small and Rines) do a lot of things. I think after a while, that’s going to catch up with you a bit.”

Hall-Dale, which got 16 points from Tyler Nadeau and 13 from Jett Boyer, also took advantage in the paint, earning 26 free throws and making 20 of them, while Richmond took eight and made five.

Few teams have had the answer for the Bulldogs, and Houdlette knew that wasn’t going to be one either.

“I expected us to go to the line a little bit more,” he said. “But Hall-Dale played very well. You miss a couple of shots and you don’t get back on defense in transition, instead of it being a 10-point lead, it’s now 28.”