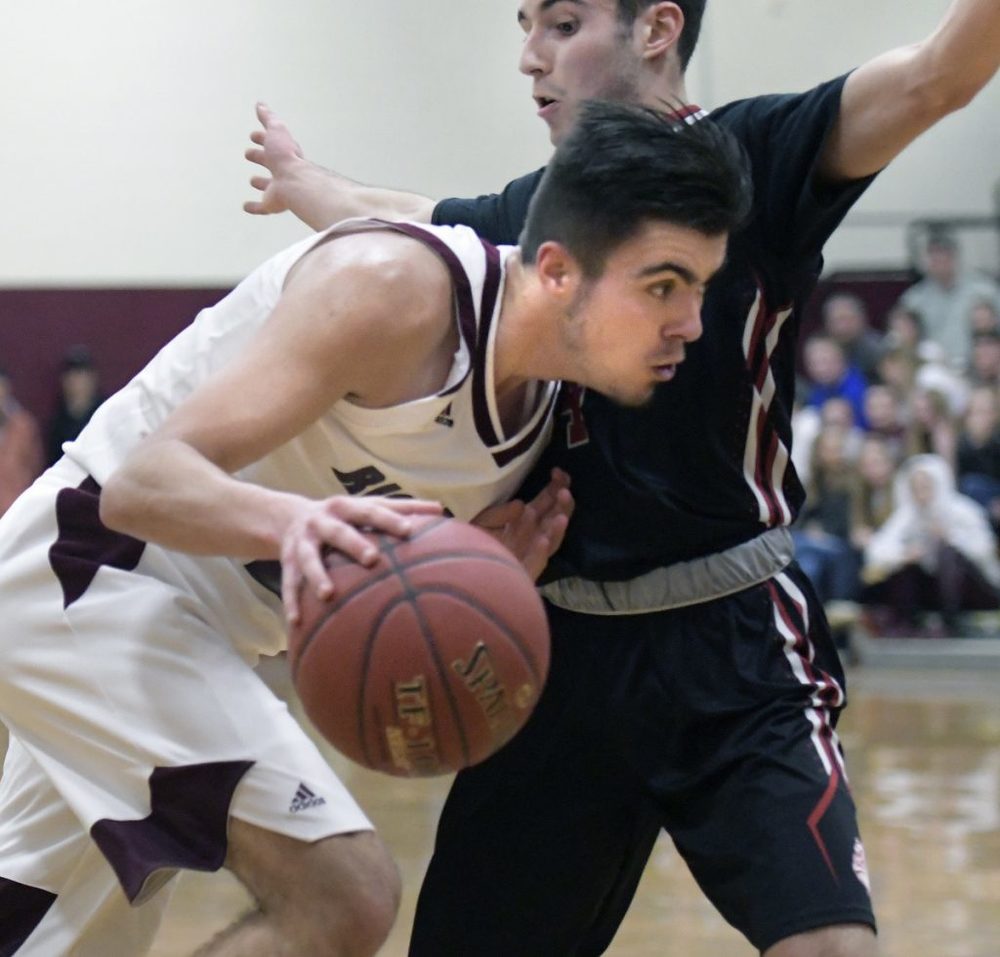 FARMINGDALE — Four seconds is barely enough time to blow your nose, yet Hall-Dale junior Alec Byron made it last long enough to bring a packed gymnasium to its feet Saturday afternoon.

Trailing by a point, Byron took a pass from the opposing baseline near mid-court then powered toward the basket, laying the ball in with his left hand as the buzzer sounded. His hoop gave the Bulldogs a 68-67 win over Richmond in a game worthy of its finish.

In a game that saw 14 ties and 11 lead changes, the visiting Bobcats went ahead 67-66 on Zach Small’s penetrating jumper.

After a timeout, the Bulldogs passed the ball to Byron between the circles and he dribbled over mid-court.

“I knew that my speed is definitely an advantage and we had four seconds so we had to get the ball up as quickly as possible,” Byron said. “I didn’t really have any other thought in my mind than going right to the rim and taking it strong. When I saw that open lane on the left side I did a simple crossover and went up with my left hand and it went in.”

The win completes a banner regular season for Hall-Dale at 17-1, while Richmond is 13-4 with a game remaining against Winthrop. Just two weeks ago, Hall-Dale handled Richmond on its home court 82-59.

“That was the lowest point of our season,” Small said. “We’ve come a long way since then. I think today we proved we can play with anybody.”

The Bobcats trailed 50-47 with 4:58 left, but quickly took the lead with a barrage of 3-pointers — two from Small and one each from Matt Rines (21 points) and Caleb Densmore — to make it 59-52 with just over two minutes left.

“I thought that was the (turning) point there,” Hall-Dale coach Chris Ranslow said. “We stayed together and we stayed on track and we stuck with the game plan.”

Neither team was done yet. The Bobcats took a 65-63 lead with 34 seconds left on a pair of free throws from Small. Sophomore Josh Nadeau, who replaced his brother Tyler when he fouled out, came up with his most important shot of the season when he banked in a 3-pointer with 12.8 seconds left to give the Bulldogs a 66-65 lead.

“At first I didn’t think it was going in,” Nadeau said. “It didn’t feel right.”

The Bobcats led most of the first half in which both teams turned the ball over frequently. Small scored 10 points while teammate Nate Kendrick connected on a pair of open 3-pointers. Tyler Nadeau kept the Bulldogs alive with 10 points but his team still trailed at the half 23-20.

Ashtyn Abbott (14 points, nine rebounds) came alive for the Bulldogs in the third quarter as the lead bounced back and forth. Rines scored eight in the period, which ended with the Bulldogs on top 43-40, setting up the frantic finish.

“Last year we wouldn’t have been able to close out these games,” said Byron, who scored 15 points. “This year we’ve really matured and now we’re able to finish out these tight games. It feels really good heading into the playoffs.”