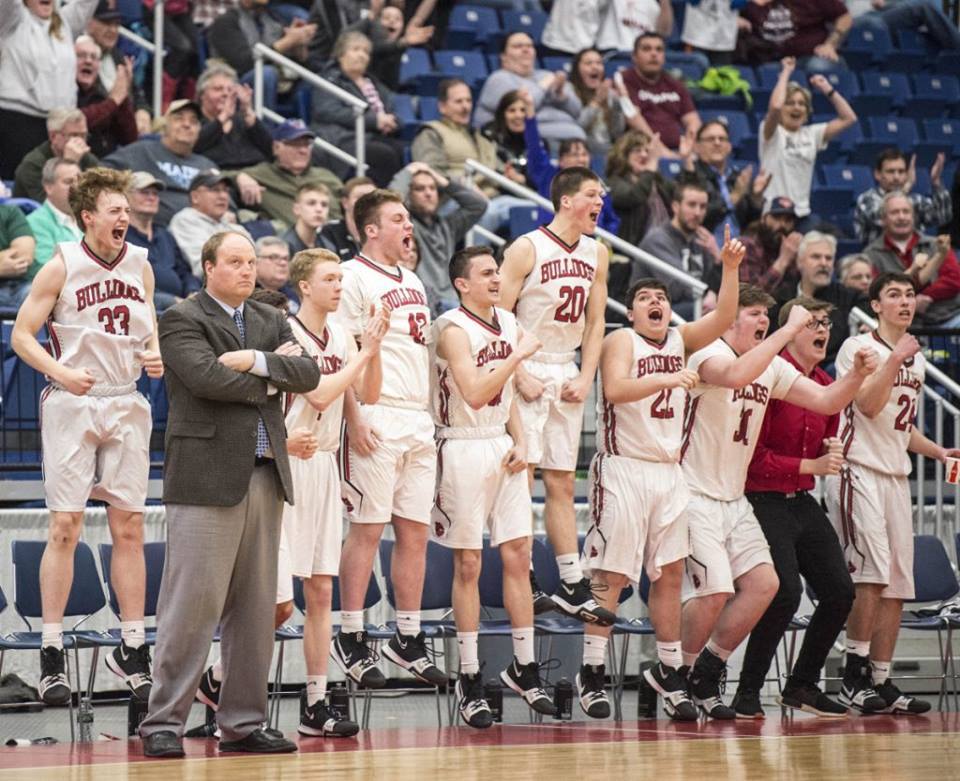 AUGUSTA — The game twisted and turned through one lead change, one defining moment, after another.

It ended with the Hall-Dale boys basketball team celebrating on the Augusta Civic Center floor, rejoicing a victory that seemed at times improbable, at others inevitable, and in the end as dramatic as they come. The top-seeded Bulldogs held off a determined Zach Small and the fifth seeds from Richmond in overtime, 76-70, in the C South semifinals Thursday night, sending Hall-Dale on to a matchup with Winthrop in the regional championship game.

There were 10 lead changes in the fourth quarter and overtime and game-changing plays from both sides. Richmond had it, then Hall-Dale took it away, and then both teams embarked on a final sprint through overtime.

One the Bulldogs found a way to win.

Byron led Hall-Dale (19-1) with 27 points, while Ashtyn Abbott had 20 and Tyler Nadeau — who hit two of the game’s biggest shots — added nine.

Small led Richmond (14-6) with 37 points, scoring 18 in the fourth and 26 altogether in the second half, while Matt Rines added 19 and Danny Stewart added nine and 16 rebounds.

FRENZIED FINISH: As Small caught fire in the second half, Hall-Dale struggled to keep up. The senior guard eventually put Richmond up 62-56 with a layup with 2:10 to go, putting the Bulldogs’ dream season on the ropes.

Or so it appeared. Rather than wilt, however, Hall-Dale roared back. The score was 62-58 when Tyler Nadeau stole the ball and dished it ahead to brother Josh Nadeau, who sent it back to Tyler for a 3-pointer with 1:11 to go.

“I came off the bench to play some defense full-court and I happened to pick a steal,” Tyler Nadeau said. “I was wide open so I called for the ball. … It’s an in-the-moment shot for the most part.”

So was his follow-up. Abbott picked off a rushed Richmond pass after the 3 and Nadeau found himself in the spotlight again, taking a pass — again from his brother — and flipping up a shot from the right side that gave Hall-Dale a 63-62 lead with 50 seconds left.

“Again, I was wide open, so I just had to finish it,” he said. “You don’t realize how big it was until after.”

Coach Chris Ranslow said the rally, impressive as it was, didn’t surprise him.

“It’s great resiliency,” he said. “They do a great job coming off the whiteboard, executing an offensive play and then getting a defensive stop and we come back to the whiteboard. They’ve been doing it all season. A high level of basketball I.Q. and emotional intelligence, and they were able to keep it together late.”

SMALL’S ANSWER: Richmond was down, but not out.

The Hall-Dale lead got to 65-62 when Small brought the ball on the attack. He let go an off-balance shot from behind the top of the key and found twine, tying the game at 65 and, after a Richmond steal, forcing overtime.

“I think that shot was a statement on my career,” he said. “I’ve worked hard, hard, hard these four years, and that shot going in I think was just a gift.”

Richmond wasn’t able to keep the momentum going in overtime. Small fouled out with 2:16 to go, Hall-Dale got four quick points from Abbott and didn’t look back.

“I was proud of the kids for maintaining composure, and they showed a lot of character,” coach Phil Houdlette said. “I guess it wasn’t meant to be.”

THIRD-QUARTER SHOOTOUT: Close throughout, the game got a jolt in the third quarter.

Hall-Dale took a 30-27 lead into the period, but leads didn’t mean all that much in the eight minutes that followed. Small drove through the lane for a 39-38 lead with 4:12 left. Then Byron hit a 3-pointer to put the Bulldogs in front 44-43 with 2:21 left. A Small drive gave Richmond the lead back. Then Abbott returned it to Hall-Dale by grabbing an offensive board and putting it back with one hand. Two Rines free throws put Richmond back in front 47-46 with 1:24 left, only for Tim Cookson to hit two free throws and put the Bulldogs back in front 48-47 with 29 seconds left.

There were six lead changes, and for much of the quarter it was Byron (12 points in the period) and Small (eight) taking each other on in a game within the game.

STARRING IN DEFEAT: It was just the start for Small, who followed up his big third quarter with an even bigger fourth quarter, taking heavy contact on drives and knocking down shots to bring the Bobcats to the brink of a semifinal stunner.

“The only thing that was going through my mind was I wanted to get the win. I didn’t even know how many points I had,” he said. “My mentality going into that fourth quarter was that I knew Rines was on the bench with four fouls and I was just trying to attack, attack, attack and get us back that lead.”

“He’s a competitor, and we ask a lot of him,” Houdlette said. “He goes about his job and does it, and I would say he’s one of the least protected players in the MVC for sure. … He goes to the line a little bit, but not to the magnitude that he probably should.”