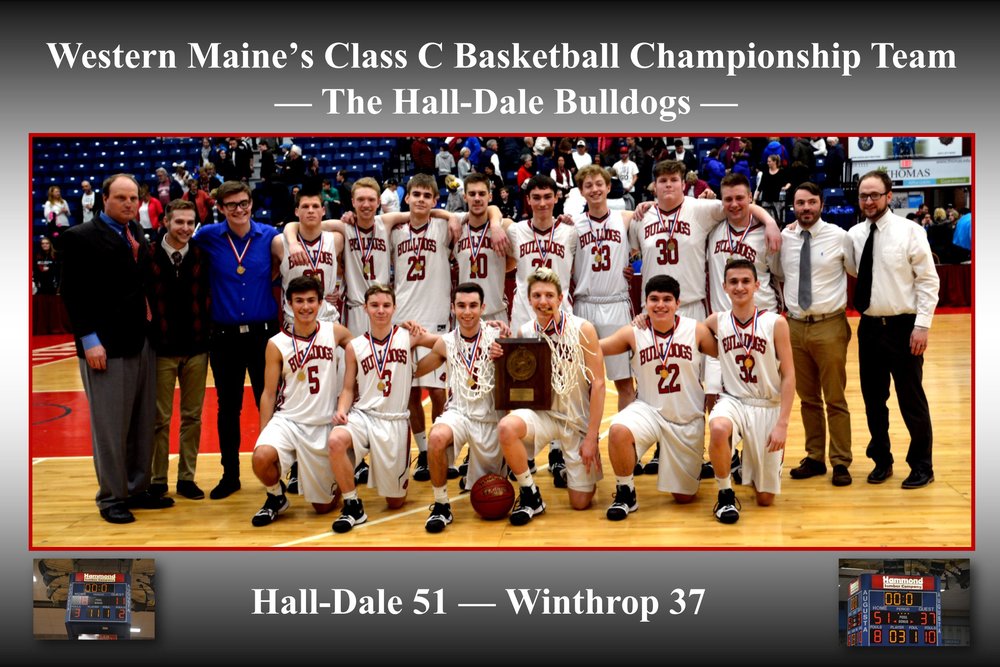 AUGUSTA — Replicating game speed in practice is difficult enough. Replicating the speed and intensity with which Hall-Dale plays defense is virtually impossible.

In Winthrop’s case, even playing the Bulldogs twice during the regular season couldn’t prepare it for how quickly the top seed’s defensive vise tightened in Saturday night’s Class C South boys’ basketball final.

Hall-Dale’s quick hands and feet were too much for No. 2 Winthrop, as the Bulldogs forced two dozen turnovers to knock of the defending regional champions, 51-37, Saturday night at the Augusta Civic Center.

The Bulldogs (20-1) advanced to their first state championship game since 2005 behind 23 points and four steals from Alec Byron and 21 points and eight rebounds from Ashtyn Abbott. They will face George Stevens Academy, which beat Winthrop in last year’s championship, at 8:45 p.m. next Saturday at the Augusta Civic Center.

Hall-Dale swarmed Winthrop the length of the court, defenders seemingly popping out of nowhere as the Ramblers, thinking they were in the clear, looked for an open teammate, only to be rushed into a bad pass or have the ball poked away.

“I would say that our defense won the game tonight. We just played incredible,” Byron said. “We only held them to 37 points, and I thought we limited Wood pretty well, as well as (Jared) McLaughlin.”

McLaughlin, the Ramblers’ second-leading scorer, who had 23 points in their semifinal win over Boothbay, was blanketed all night and finished with two points.

“We thought we were ready for this moment,” said Winthrop coach Todd MacArthur, whose team lost to the Bulldogs, 49-46, during the regular season and 43-41, in the Mountain Valley Conference championship. “We obviously weren’t. I don’t know if that was nerves. I don’t know if that was them just being the superior team. I mean, they’re the better team. We found that out three times.”

“We were able to win two low-scoring games (against Winthrop) … and both times were predicated on turning the basketball over and playing full-court defense and playing really, really fast on our feet and not necessarily with our hands,” Hall-Dale coach Chris Ranslow said. “We were trying to keep them off the free-throw line, and then obviously make it really, really difficult for McLaughlin to get loose and shoot 3s, and for Wood inside.”

The Bulldogs forced 11 turnovers in the first 10 minutes and 15 in the first half to roar out to a 27-11 lead. Winthrop attempted only two shots in the first 5:19 of the second quarter.

Further tilting the possession imbalance in Hall-Dale’s favor was the work on the offensive boards by Abbott and Owen Dupont and the rest of the athletic Bulldogs.

“We were outsized across the board,” Ranslow said. “We start 5-4, 5-5 up front, and then our kids inside aren’t that big. They’re 6-1, maybe one of them’s 6-2. We were giving up size all over the place, but it’s just a matter of mental toughness.”

Yet the Ramblers were able to pull within 27-17 by halftime thanks to a Beau Brooks jumper, and inside hoop by Wood and a drive to the hoop by Jevin Smith.

Another jumper by Brooks to start the second half got the Ramblers within single digits. But Byron stole the ball back from Nate LeBlanc after he had made a steal and converted it into a three-point play, then stripped Wood after a rebound for another layup, to inflate the lead back to 36-33 midway through the third quarter.

Byron said he was sick from the time he woke up Saturday, but never doubted he would play.

“I had kind of a rough day today. I vomited a couple of times before I came here. I was playing sick,” he said. “I battled a fever all day. I was very tired. I came out here and I knew that this could be my final game of my junior year and I just worked my butt off.”

“I’m worried about everything all the time,” Ranslow said when asked if he was concerned Byron might not play. “Yes, I was worried. But he’s also a gamer.”

Winthrop got a little bit closer to start the fourth, pulling within eight on a Figueroa hoop and LeBlanc free throw. Back-to-back turnovers stifled momentum, however, and the Ramblers would go nearly three minutes without another point. A 3-pointer by Byron and free throws by Abbott and Byron made it 45-30 with 4:10 to go.

“We never got any of our double-stagger screens,” MacArthur said. “That was part of our game plan, too, in terms of executing our offense. When we reverse the ball, when we have two on the weak side, we usually do double-screens on that, and we just didn’t execute our offense. Obviously, it was their pressure that took us out of our offense, so we never got those opportunities (for McLaughlin).”

“I think the moment really brought the best out of us tonight,” Ranslow said. “The place was absolutely packed. Credit to Winthrop and their fan base. They always travel so well. And our fans came out in full force and kind of raised the energy.”