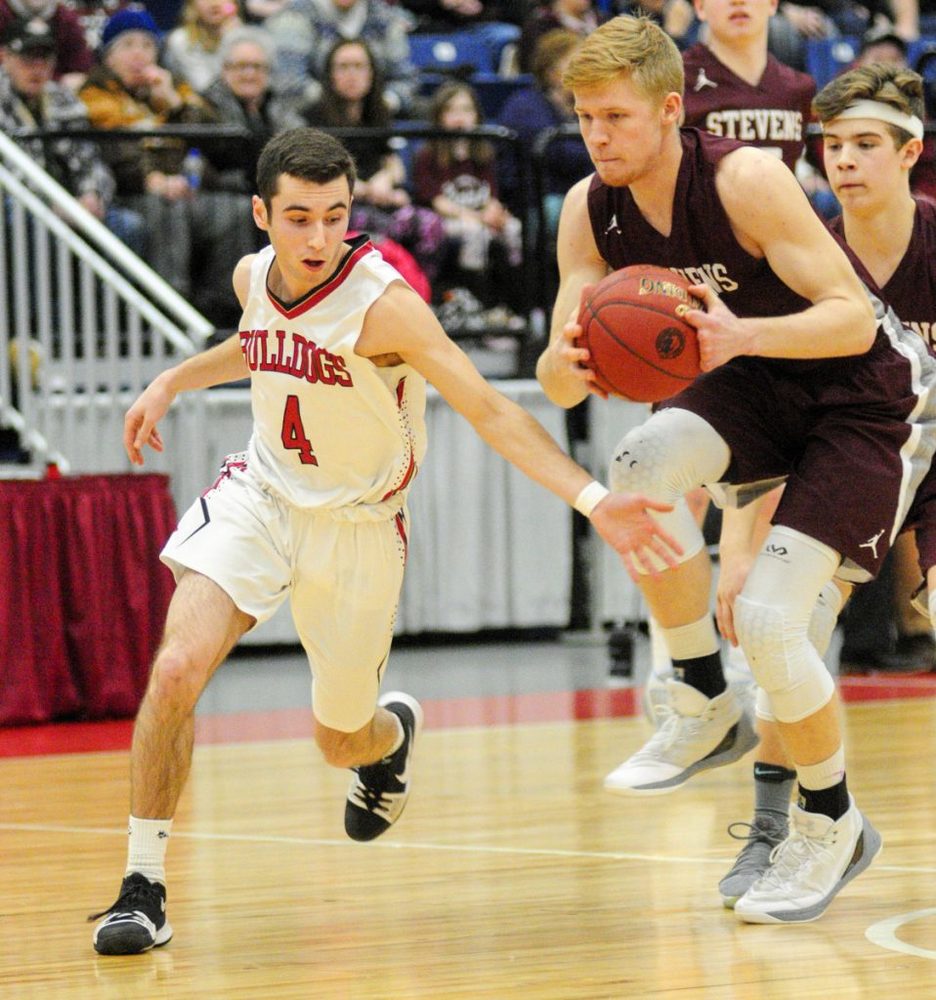 AUGUSTA — Taylor Schildroth had just seen the ball splash through the net to end the third quarter, another shot beating another buzzer, and the George Stevens Academy senior couldn’t contain himself. He looked up at the Augusta Civic Center ceiling and screamed, met in seconds by his joyous teammates.

Schildroth buried another to start the fourth. Then another, bumping the lead to 16 and prompting another fist-pumping shout from the sharpshooter.

It was Schildroth’s and the Eagles’ time, yet again.

George Stevens won its third straight state championship, battling and then pulling away from Hall-Dale, 64-59, in the Class C final Saturday night.

“We’ve been so fortunate to get here and win it three times,” Schildroth said. “It’s kind of selfish to want to ask for a win to end a career, but that’s definitely how I wanted to go out.”

Schildroth led the Eagles (21-1) with 27 points, while Stefan Simmons scored 14 with eight rebounds and Max Mattson added 10 with 11 boards.

“It hurts. It’s not a good feeling,” Byron said. “It was an incredible season, but we couldn’t come out with the Gold Ball in the end.”

Title No. 3 didn’t come easily. Not at the start, at least. Hall-Dale gave the two-time champions all they could handle, working their way to a 29-27 halftime deficit. Whenever the Eagles made a push, the Bulldogs had one back. Hall-Dale tied the score six times in the first half, and even held a slight 21-19 advantage early in the quarter.

But the warning signs were there. Hall-Dale had no answer for George Stevens’s size, getting pounded on the boards 21-9 in the first half, and stayed afloat only by forcing Eagles turnovers and taking advantage in transition.

That’s a perilous way to play, and in the second half, that style collapsed. Max Mattson (11 rebounds, 10 in the first half) and Stefan Simmons (eight rebounds) gave the Eagles one second-chance opportunity after another, and George Stevens used that advantage to put up 15 shots in the third quarter to Hall-Dale’s nine, and make eight baskets to the Bulldogs’ three.

“We knew we had a size advantage, and I knew that they wouldn’t be able to stop Stefan or Max, and if they tried to do one, they couldn’t do the other,” coach Dwayne Carter said.

It was the last gasp for the Bulldogs. George Stevens went on a 13-2 run, turning a five-point lead into a commanding 54-38 advantage with 6:33 to play.

“Today, it kind of got away,” coach Chris Ranslow said. “I felt like it slipped away, it got too far and we couldn’t climb back from 16.”

The last three baskets came from Schildroth, as he emphatically reclaimed his form after a 3-for-15 shooting performance in the first half.

“The one to end the third, I needed that one personally because I was struggling with my feel from the beginning,” Schildroth said. “I came out and started the fourth with two more, and at that point I kind of knew.”

While the second half turned into a runaway, the first was dead-even. After Hall-Dale tied the game at 8, no team led by more than four points the rest of the way, and the Bulldogs got the first basket of the third quarter on a Byron layup with 6:19 to go.

Hall-Dale was getting contributions from starters and bench players alike, with Abbott turning in nine points and Jackman turning in eight of his 14 off the bench. The C South champions looked up for the task, which coach Chris Ranslow figured would be the case going in.

“I didn’t think it was going to take a Herculean effort,” he said. “They’re a very good team, they’ve got great players, they’re well-coached, but we played them and we lost by four. … I thought their second-chance points really hurt us.”

Hall-Dale had some fight left at the end, as Abbott scored 11 points in the fourth and and Josh Nadeau hit a 3-pointer to make it 60-51 with 53.4 seconds left.

There was only time left for a miracle, but even then, the Bulldogs that they had one left.

“The odds have been against us all season,” Abbott said. “We weren’t counting anything out. … It was another day on the job for us.”