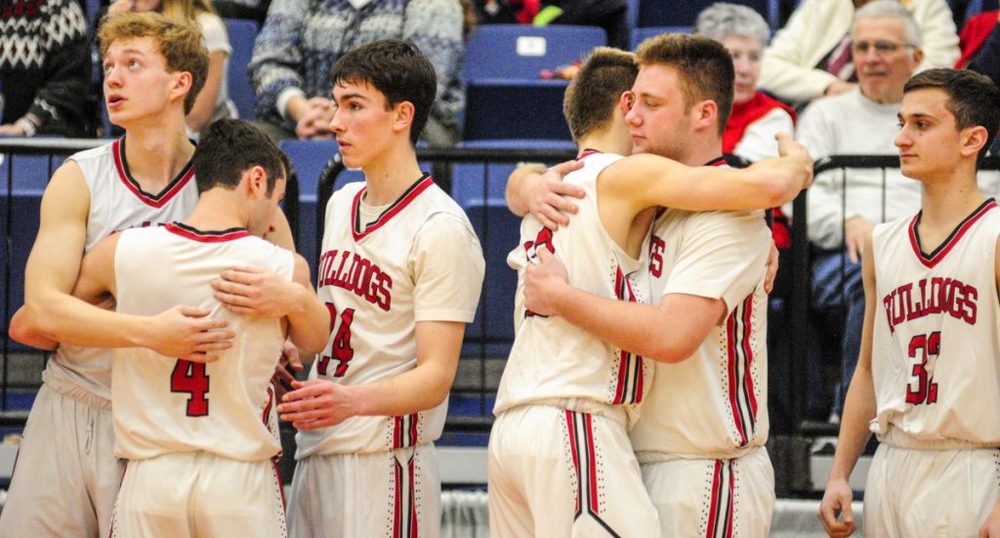 AUGUSTA — While the George Stevens Academy players remained gathered at halfcourt, some with nets around their necks, all with smiles on their faces, the Hall-Dale players and coaches milled around outside the entrance to the Augusta Civic Center locker rooms.

There were few, if any, tears. There was disappointment, however, after a season so memorable came to an end with the kind of defeat that had become unfamiliar in Farmingdale.

Staff photo by Joe Phelan The Hall-Dale Bulldogs hug as time runs out against George Stevens in the Class C state championship game Saturday at the Augusta Civic Center.

“We weren’t our best today, but they beat us. We didn’t beat ourselves,” said coach Chris Ranslow, whose team lost to the now three-time defending champion Eagles, 64-59, after trailing by as many as 16 points in the fourth quarter. “I’m awfully sad for the guys that just played their last game.”

There wasn’t much of a sense of optimism among the Bulldogs (20-2) last night, as is often the case after championship game losses, but the arrow is still pointing up with this Hall-Dale team. Teams don’t often return from a state final with their best players, but the Bulldogs will. Alec Byron, the C South tournament MVP, will be back. Ashtyn Abbott, who developed into the team’s best all-around player and scored 22 points Saturday night, will be back. So will starting guard Josh Nadeau, who as a sophomore became one of the team’s more trusted players with the ball in his hands in the final, pressure-packed minutes of games. Tim Cookson, a 6-2 junior who saw playing time throughout the postseason, seems an ideal candidate to slide into a bigger role next year.

There are still plenty of holes to fill. Jett Boyer was a leader and a dangerous scorer, Owen Dupont was the team’s best inside player, Tyler Nadeau was one of the team’s best players in big moments and Dean Jackman was a capable scorer and rebounder off the bench, one who was given a bigger role against the Eagles on Saturday and responded with 14 points.

But few teams can ask to return the punch from a state finalist that the Bulldogs will, and the players coming back will return not with the goal of learning to win, but with the drive to win just one more game.

It’s also a hardened group. The Bulldogs didn’t coast to the final and get exposed by a bigger, badder Eagles team. Hall-Dale played a tough schedule, one that included Class AA and A teams in the preseason and exhibition tournaments beyond the grind of a Mountain Valley Conference slate. The Bulldogs then had to fight their way to avoid an early exit, overcoming fourth-quarter deficits against Traip Academy and Richmond en route to playing for a Gold Ball.

Saturday’s challenge was simply too steep. George Stevens came in with two straight Gold Balls to its credit and two Mr. Maine Basketball semifinalists on its roster, and the Eagles looked that formidable from the start. Hall-Dale kept pace through the first half, fighting back to tie the score six times and even taking a 21-19 lead early in the second quarter, and eventually going into the locker room down only 29-27 and in perfectly good position to make a second-half run.

“We knew it was going to be a barn-burner. That’s what happens when the two best teams meet at the end,” Abbott said. “It was just a tough game, going back and forth. It felt good giving it back to them, but in the end we didn’t quite get it done tonight.”

George Stevens’ size, which was negated in part by Eagles turnovers in the first half, took over in the second half. George Stevens outrebounded Hall-Dale 34-18, and one of those semifinalists, 6-foot-6 Max Mattson (11 rebounds), combined with Stefan Simmons (eight rebounds) to out-board the entire Bulldogs team by themselves.

“They’re just a bunch of strong kids, and we didn’t quite box out to the extent that we needed to,” Abbott said. “Great players on the other team, but I think boxing out was the biggest difference to winning this basketball game.”

With the rebounding advantage, Hall-Dale couldn’t get stops as even the Eagles’ misses would just be turned into offensive rebounds and putbacks. The result was a 13-2 run that the Eagles put together after Hall-Dale made the score 41-36. Once George Stevens’ other semifinalist (and now finalist), Taylor Schildroth, started hitting shots, including a run of three 3-pointers that made it 54-38 with 6:33 left, it was all but over.

“One of the primary objectives we had coming in was to make sure we cleaned up the defensive glass,” Ranslow said. “I thought their second-chance points really hurt us, kind of over the series of the game.”

It was the Eagles’ time. It could yet be the Bulldogs’. Enough players are back for Hall-Dale to be a team to beat again next year, and there’s no better way to prepare to win a championship game than by getting there.

“Oh, it’s a big help,” Abbott said. “I think (for) everyone coming back, this is just going to be more motivation for us to try to get back there and take it next year.”

“You can’t simulate the second half of a state final game,” Ranslow said. “You can spin the basketball and say ‘I’m in my driveway, here I am, it’s all on the line, I’ve got to make two here.’ But (it’s not the same) until you get here and you experience the noise and the crowd and the energy and, really, a very good opponent.”