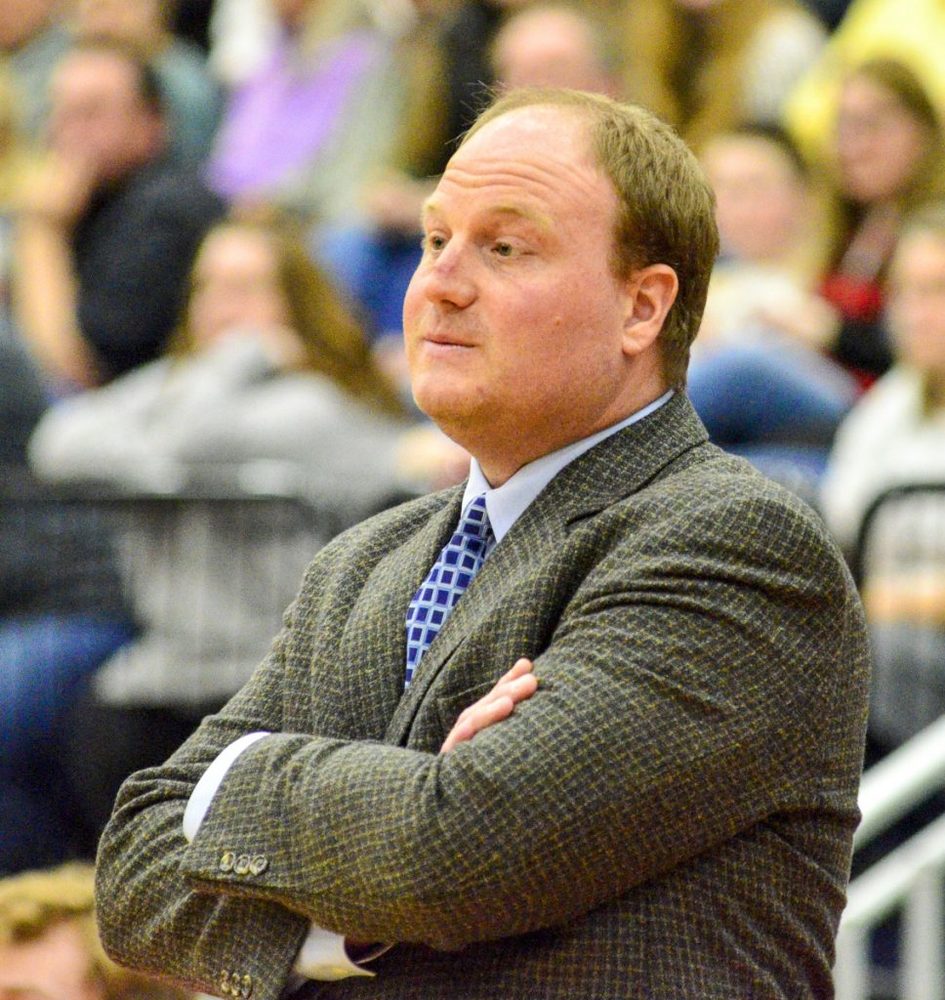 To understand Chris Ranslow’s coaching style, all you need to do is look at the photograph.

The photo is from the Hall-Dale boys basketball team’s C South semifinal against Richmond, taken immediately after a 3-pointer with less than a minute to go gave the Bulldogs a late lead over the Bobcats. Hall-Dale’s sideline is erupting, with players jumping, screaming or raising their fists triumphantly, some even doing all three.

There’s one exception. Ranslow, the Bulldogs’ coach, is standing, arms folded, with the stoic look of a coach watching his team play out the last minutes of a 20-point loss, rather than putting together a dramatic, season-saving rally.

“With 44 seconds left on the clock, it’s not really an appropriate time for me to be jumping up and down.”

After all, there was still time left and work to do, and that’s been Ranslow’s style all year. He doesn’t ride the lows or the highs — and there were plenty of highs — but instead gives the Bulldogs a stable, level-headed leader at all times. That calm, poised approach steered Hall-Dale to 20 wins and a C South championship, and earned Ranslow the nod as the Kennebec Journal Boys Basketball Coach of the Year.

“It’s very fascinating to see how he sees the game,” senior forward Jett Boyer said of Ranslow. “You’ve just got to stick to his plan and adapt to every situation that happens.”

It was rare, even as the Bulldogs piled up win after win, to hear Ranslow shower his players with praise. There was always a slow start that should have been avoided, or there were defensive rotations that were sloppy, or offensive possessions that were rushed, even if they often resulted in points.

Ranslow knew he had a team with state title potential. So he treated them as such.

“He kept the drive with us, knowing that our goal was a state championship,” senior guard Tyler Nadeau said. “He kept reminding us if we slack off one day, we could lose the chance to play in the state championship game.”

And whether the Bulldogs were playing like a title contender or not, you couldn’t tell by watching their coach. Ranslow rarely hollers at officials, hardly ever shows frustration at slumps or setbacks, and never gets animated when his team starts a rally.

He does feel those emotions. He just doesn’t show them.

“There are times when I want to jump out of my skin when I see whatever is going on on the floor, whether it’s lack of discipline or lack of execution, something that we’ve preached and talked about as a gameplan and you see the exact opposite of that, or a bad whistle,” he said. “I just want to jump out there and start doing whatever, and yet I try to stay within myself.”

There’s a reason. Ranslow wants his team’s to be calm and collected in pressure moments, and he knows a team can’t play that way when led by a coach who isn’t behaving that way himself.

“One of our founding principles is discipline under duress, and what I’ve always believed since I was five or six or seven years old is that teams largely take on the demeanor of their coach,” he said. “I can’t be getting super emotional and then expect my players to have that calm demeanor when the most is on the line.”

That was on display in the C South final. Hall-Dale at one point looked in serious trouble, down 62-56 with 2:10 left. Ranslow stood calmly, arms folded, looking both at the action on the court and the time ticking away on the scoreboard.

Two free throws, two steals and two shots later, Hall-Dale was ahead, 63-62, with 50 seconds to play. The game had turned. According to Ranslow’s reaction, however, nothing had happened.

“We were down (four) with 1:19 left, and with 44 seconds left on the clock we were up one. So that’s quite a turnaround in 35 seconds,” he said. “So yeah, I was excited, I was elated, I wanted to jump up and down. But I didn’t really think that that was going to position us well for success.”

Hall-Dale needed overtime, eventually finishing off a 76-70 victory. Just another example of that poise in the clutch.

“His knowledge of the game and intelligence of when to do stuff in certain spots really helps us execute in crunch time,” Nadeau said. “He’s about the grind, working hard. … Doing the simple stuff that helps a team win a basketball game.”