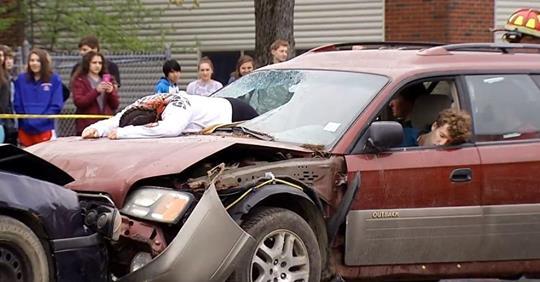 FARMINGDALE (WGME) -- A head-on collision in the parking lot of Hall Dale High School in Farmingdale may have looked real, but it wasn't.

With prom and graduation season upon us, emergency workers and some actors from the high school put on a mock accident to show how dangerous drunk and distracted driving can be.

They used smashed up vehicles and the actors had fake blood that looked like the real thing.

Tarps were used to cover student acting like they were dead and emergency workers even used the jaws of life to try to rescue some of the actors.

According to one of the actors, it really had an impact.

"One of my friends started crying even though she knew it wasn't actually real. I know it impacted them in that way seeing their friends. It can happen to anyone,” Kaylee Bickford, Hall Dale junior, said.

The students had no idea officials were going to do the mock crash. They thought it would have more on an impact on the students that way.