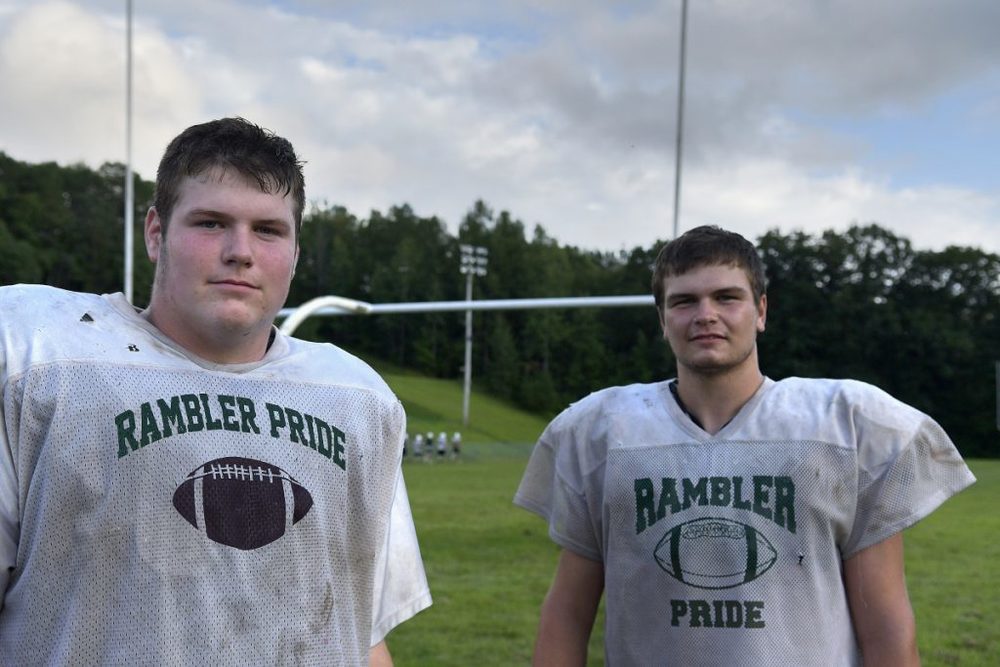 “My whole life, people always were like ‘Oh, wow, you’re a really, really big kid. You should go play football,’ ” the Hall-Dale High School senior said. “I went to a small school and we didn’t have football, so it piqued my curiosity how I would do if I did take a chance on it."

This fall, Canwell and the rest of the Hall-Dale students got their chance. After two years of discussion and deliberation, the decision became official this summer to add Hall-Dale to the Winthrop/Monmouth football team. The move has added two Hall-Dale students in Canwell and junior Patrick Rush to the varsity, and freshman Owen Getchell to the JV team.

It’s already paying dividends. Canwell and Rush have impressed and could be starters this year on the offensive and defensive lines, and in Class D, where depth is at a premium, coach Dave St. Hilaire said the upside is hard to miss.

“Hopefully that gets kids excited about it all the way up through,” he said. “It would be nice to have more.”

Bringing the opportunity to play football back to Hall-Dale was a goal of athletic director Colin Roy’s, who played and coached the sport with the Bulldogs and was the athletic director when the order came to cut football in the early 1990s. Roy then went to Mt. Ararat, where he started a football program, and when he came back to Hall-Dale he wanted to breathe life back into the sport.

For two years, the interest wasn’t there. This time, however, Roy and Winthrop athletic director Joel Stoneton began the process in the spring instead of the summer, and Roy got the momentum he needed.

“When I got the opportunity to come back to Hall-Dale to finish my career, I thought it would be nice to find a way for kids to play varsity football again,” he said. “We got together, we got things moving, got some interest and put everything to work and we got it to happen.”

“I’m a big boy, everyone kind of said that,” Rush said. “I went to a couple of days of (spring camp) and I loved it, being able to be physical with others.”

But then the preseason began. And Canwell and Rush, newcomers to the sport who had never played a down of organized football, started to feel like the novices they were. There were terms and concepts the rest of the team knew that they had never heard before. They heard plays described in what sounded like a foreign language.

They had watched football. But putting on helmets and pads meant walking into another world.

“Canwell made the comment at one point, ‘Coach, I don’t know the difference between a running back and a defensive tackle.’ At that point…” a smiling St. Hilaire said, his voice trailing off. “It was what it was.”

“The plays and the language (were hardest),” Canwell said. “Mechanics are kind of easy to learn for me, I learn by visualizing. But because I’m involved in so many of the plays, it’s hard for me to take a step back and see other people do them.”

It was hard, so Canwell and Rush treated it that way. They went home and went over the playbook again and again, making sure that whatever they didn’t know, they would know.

“You have to take time every night to study that, and that was kind of a pain because it’s summer,” Rush said. “But if you want to do this and you want to be good at it, you’ve got to put in the work.”

The work paid off. The unfamiliar feeling faded, and so did the traces of trepidation throughout the course of a play. There was no longer the concern of not knowing where to be, or the fear of being hurt on any play.

“I’d never been hit before … so that part was a little scary at first,” Rush said. “But they were all just like ‘You’re one of the biggest guys out here. You’re probably going to hit people harder than they hit you.’ ”

“I can just watch the film and see that I look less confused,” Canwell said. “It’s much easier. … Everybody’s got to gain their confidence in me and I’m gaining my confidence in them.”

As the mistakes have become fewer and fewer, their athletic abilities have made themselves clear. With Canwell’s background as a soccer player and Rush’s playing baseball and basketball, St. Hilaire said it’s easy to see the quickness each brings to the field to pair with their size.

“We’ve got film … from Leavitt of Rush just using great footwork and driving his man out in the pass rush,” St. Hilaire said, “and Canwell pulled his man in … he looked like he had a fish stuck on a spear. And this was their starting defensive end.”

They’ve progressed to the point that St. Hilaire is weighing starting them on the line, with Rush at tackle and Canwell at either tackle or guard. Not bad for a couple of rookies.

“If we don’t have those two guys this year, I don’t know what our offensive line, defensive line is going to look like,” St. Hilaire said. “They’re real smart kids, they’re athletes, and they’re coming (along) quick.”