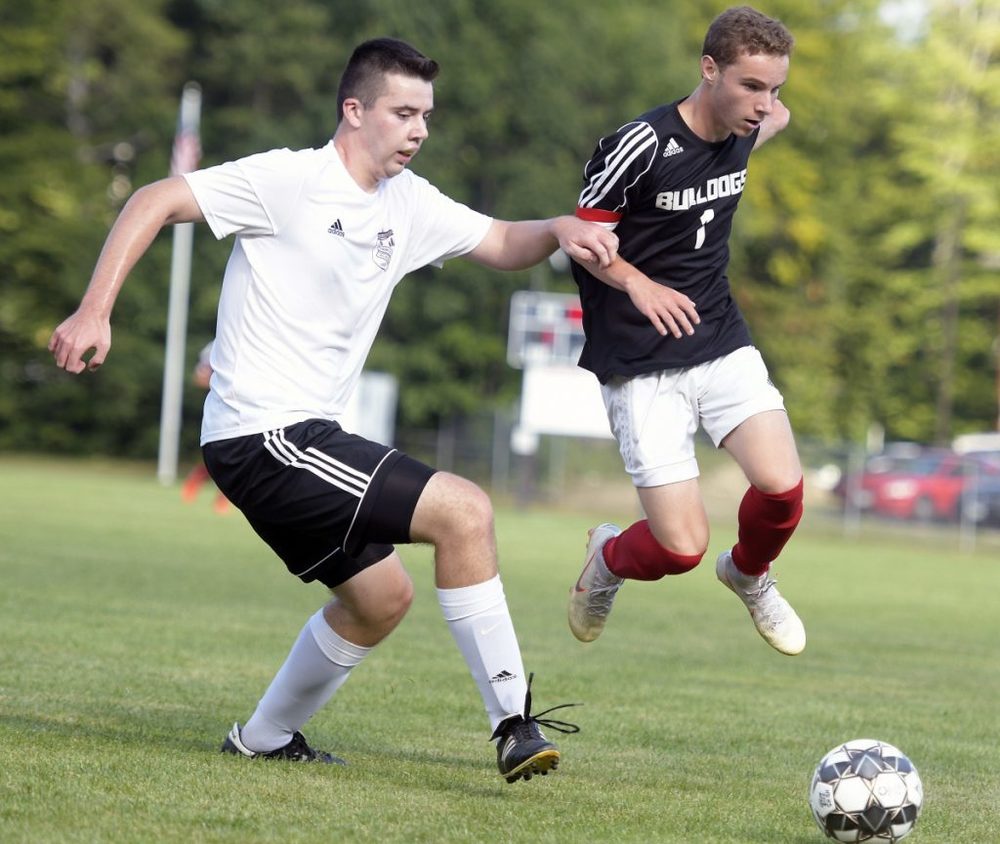 FARMINGDALE — Just a couple of match days into the new season, a pair of Mountain Valley Conference boys soccer heavyweights sit at opposite ends of the spectrum.

Hall-Dale’s 3-0 victory over Monmouth Academy on Wednesday at Simmons Field was as convincing as the scoreline indicated. The Bulldogs (2-0-0) posted their second clean sheet in as many outings, while the Mustangs (1-2-0) lost for the second time in three games to begin the campaign.

Two glaring differences between the sides existed in head-to-head play. Hall-Dale’s speed up top proved capable of breaking down the Monmouth backline with regularity, while the Mustangs’ collective ability to possess the ball in the midfield — particularly in the second half following an uneven opening 40 minutes for the visitors — failed to make a dent in the final attacking third of the pitch.

“Hall-Dale is a good team, they’re well-coached and they’re deep,” Monmouth coach Joe Fletcher said. “That’s the difference between the two clubs. We just don’t have the depth right now, but we’ll get there as it goes.”

Hall-Dale employed a new look Wednesday, featuring an attacking front three atop a 4-3-3 formation. That forward trio of senior Alec Byron, junior Josh Nadeau and sophomore Ian Stebbins accounted for all three goals in the match.

“This is the first time that I’ve ever in my career, probably 29 years, used the three-striker system,” Hall-Dale coach Andy Haskell said. “But it’s the right combination of guys. We’re playing the system that works best with our talent.”

“We haven’t exactly played together much in the past,” Byron said. “I think we just work really well together. Most of the time, we know where we’re going and where the ball’s going.”

Byron scored twice (28th minute, 64th minute) to put the game out of reach, Nadeau opened the scoring only three minutes in and Stebbins’ perfectly weighted passes through the Monmouth backs set up two of the goals.

Nadeau brilliantly leapt and cleanly knocked Abbott’s aerial clear to his feet, turning and sending a through ball to Byron. The ball ricocheted into the air off a retreating Monmouth defender, and Byron kept moving forward for a headed flick over Connor Davies (10 saves), who had come off his line to try and make a play on the ball.

“We definitely try and work it through the half-spaces a lot,” Byron said. “It’s not necessarily run and gun, but it’s just trying to kick those little through balls.”

“Collectively, this was the first game we’ve had where everybody was connected well together, between the midfield and the strikers,” Haskell said.

Though there were opportunities for even more goals, three was more than enough in front of a Bulldog back four anchored by sophomore goalkeeper Sam Shaeffer (eight saves) which has yet to concede in 2018. Senior center back Austin Stebbins believes the team’s commitment to defending as a unit is paying dividends.

“We’re always talking, always keeping it tight,” Austin Stebbins said. “We’ve just been building chemistry from Day 1. Building up (from the back) is the start to everything.”

The game could have turned for the Mustangs on either of a pair of hit sticks.

In the 12th minute, junior Gabe Martin got on the end of a Hayden Fletcher cross but rang his half-volley off the left post. In the 49th minute, one of the rare instances of sloppy defending on a cross by Hall-Dale fell to Fletcher’s feet, and he turned to the short-side left and forced a lunging save from Shaeffer — which Shaeffer directed off the near post.

“They do a good job of packing it in (defensively) when they need to, and it’s hard to get a good look,” Joe Fletcher said. “We hit the post. We hit the post again. It’s a game that could have turned pretty easily.

“We have to learn how to win these games. We also need our juniors and seniors to say, ‘These are the games that we have to win.'”