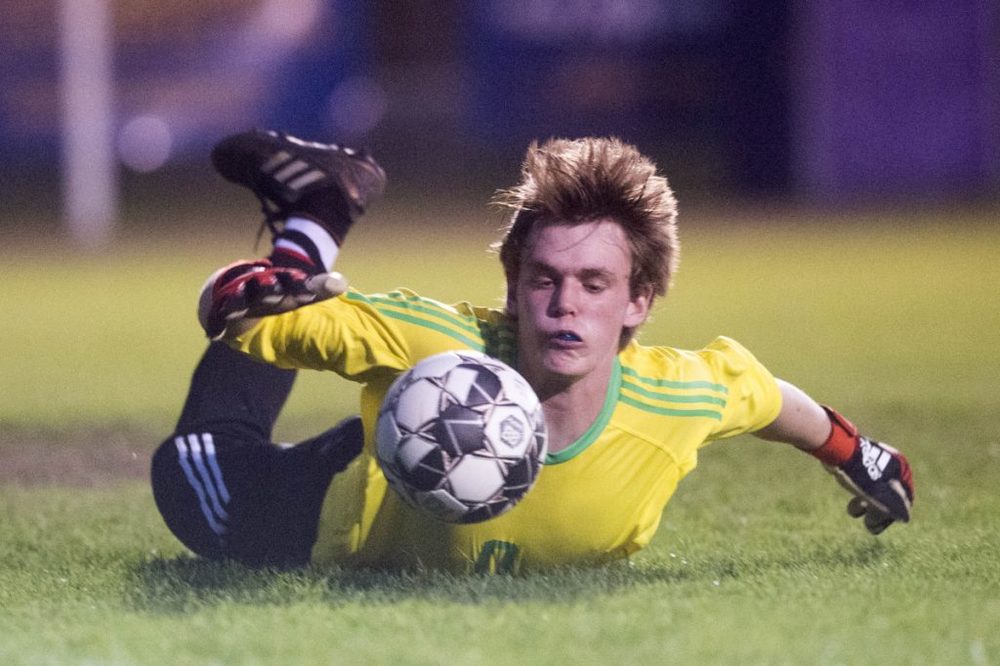 SALEM — The slimmest of hairs separated the Hall-Dale and Mt. Abram boys soccer teams Tuesday night in a meeting of two of the region’s best sides.

In a game featuring few poor decisions on the pitch, and even fewer scoring opportunities in either direction, it was senior Alec Byron’s goal shortly after the halftime break that provided the difference in Hall-Dale’s 1-0 win over Mt. Abram in a Mountain Valley Conference tilt at Avery Field. The Bulldogs improved to 12-0-0.

It was the second meeting inside six days for the two teams, and a third awaits next week in the MVC conference championship. Hall-Dale’s second one-goal decision over Mt. Abram in as many tries dropped the host Roadrunners to 10-2-0.

“Our defense held tough, their defense played well and Byron had a great goal,” said Hall-Dale coach Andy Haskell, whose team entered the week holding the top spot in Class C South. “Soccer’s a game of luck, chances, misses and mistakes, and we just try to be one goal better than the other team.”

It was not easy for either team, not in the midfield and not along the back lines.

To wit: Hall-Dale attempted 10 second-half shots but only managed to put three of those on target. Mt. Abram, meanwhile, wasn’t as easily able to generate in the attacking third after halftime and got off just three shots — none of them finding the target, despite a couple of near-misses at the back post off services from junior Tyson Hill along the left flank.

“It was a good battle,” Mt. Abram coach Darren Allen said. “That’s a great team. Coach Haskell is great with them, they’re very organized in the back. I thought we had a couple of chances but just missed. These are the games you love to coach, because they’re great.”

When the chance did come to find separation, Byron and junior Josh Nadeau did well with it.

Mt. Abram senior striker Oskar Martinez tried an ill-advised dribble out of the back on 43 minutes, which Hall-Dale midfielder Ashtyn Abbott was able to pluck off the Roadrunner target man’s foot. Abbott turned the ball off to Nadeau, who slotted a pass through for Byron.

“We had to hold down the middle, because they love to work through the middle,” Abbott said. “Winning headers and getting up there, really helps us to clear the ball out and distribute after that.”

Byron did the rest of the job, whipping a shot past Mt. Abram keeper Jack Deming (six saves) for the only strike of the evening.

“I thought in the second half we played hard, and I had that one opportunity. Fortunately, I was able to put it in,” Byron said. “I don’t get too nervous in there. I know my adrenaline’s pumping but I try not to overthink things. I try to just go in there and put it in the back of the net.”

The game opened up a bit for the Bulldogs late on, with Mt. Abram pressing higher in search of an equalizer, but they could not connect for the insurance marker. The best of those chances came off the right foot of senior center midfielder Matt Albert, whose short-side free kick from just off the left edge of the penalty area was thwarted by a diving save from Deming in dense traffic along the goal line.

“Playing on a smaller field, they’re able to work the ball around more, which made our midfield work a lot harder,” Abbott said. “Our defense worked a lot harder, too, but our defensive line is a brick wall.”

Though the two sides played only six days earlier — a 2-1 Hall-Dale victory — this game was very different. Hall-Dale’s larger pitch allowed the Bulldogs to utilize their skill and speed, while the Avery Field dimensions turned things into more of a match channeled through the middle. Abbott and Albert, along with others, presented a size advantage that first neutralized Martinez in the middle and then forced the Roadrunners to serve side into a strong, tall Bulldog back line.

After Cam Walters fed J.B. Jordan in the 28th minute, Jordan took a wicked crack at goal that called Bulldog keeper Sam Sheaffer (two saves) into action with a diving save at the left post.