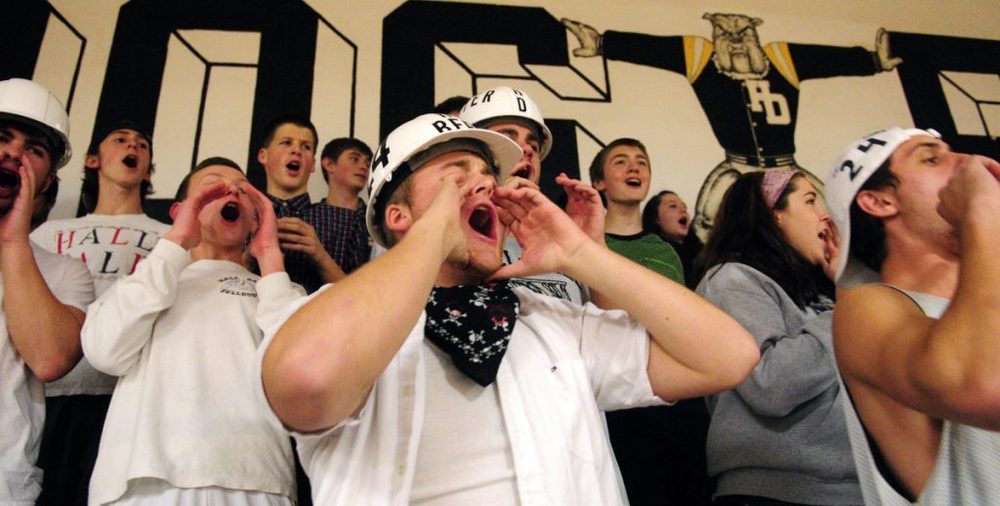 Gardiner girls basketball coach Mike Gray sees some of the gyms on his team’s schedule and doesn’t give them a second thought.

And then some leave even a coach in his 15th year at the helm wondering how his team will be able to win that night.

“Sometimes the gym just depends on the team,” Gray said. “And then there are other places that are tough, regardless of which team is better, or regardless of the standings.”

There’s a celebrated basketball culture in central Maine, and with that culture comes gyms steeped in history, charm or character. No two gyms are exactly alike, but some manage to stand out even further from the norm. They’re the ones with the tight court dimensions, or the rowdy fan sections, or the vibrant acoustics. They’re the ones with the weird lighting, the unusual shooting backgrounds or the strange floors.

“I love going to those gyms that are packed,” Hall-Dale girls coach Jarod Richmond said. “It’s tough to coach in those loud gyms, but I think as coaches and as players, you kind of love that, you kind of thrive on that. Basketball in Maine is special.” Hall-Dale’s Mike Woods, right, goes up for a shot as Wiscasset’s Travis Padilla (34) tries to stop him during a 2012 game in Penny Memorial Gym at Hall-Dale High School in Farmingdale. Staff photo by Joe Phelan

Indeed, Folsom Gym at Lawrence has gained a reputation as a Kennebec Valley Athletic Conference madhouse. Fans couldn’t be closer to the action — the team’s benches are the first row of the bleachers, putting fans’ knees at the players’ backs — and it doesn’t need to be a sellout for the Bulldogs’ riled-up Rowdies, Lawrence’s boisterous student section, to rack up the decibels.

“There’s no separation from you and the fans at all,” Maines said. “You don’t need a lot of people at Lawrence to make you feel like it’s packed.”

Folsom can be so intimidating, teams have to spend time in practice preparing just for the environment. Maines said he cranks up the music at Cony practices with Lawrence up next.

“They have to get used to looking at the bench and seeing what we want, because you’re not always going to hear,” he said. “Kids that are playing there for the first time will be like ‘Oh boy.’ ”

The Lawrence girls once won 37 straight home games, a streak that ended in 2016 with a 37-33 loss to eventual state champion Messalonskee. It didn’t go easily for the Eagles. Messalonskee fans cheer as the Eagles take the lead in the fourth quarter during a Kennebec Valley Athletic Conference Class A boys game against Erskine last season in Oakland. Staff photo by Michael G. Seamans

Lawrence boys basketball coach Jason Pellerin, himself a former Bulldog player, knows the homecourt advantage Folsom can be. Pellerin recalled a recent senior night game in which the crowd, led by the Rowdies, was deafening.

“It made it feel that night like they weren’t just playing us, they were playing everybody,” Pellerin said.

Added Messalonskee boys basketball coach Peter McLaughlin, also a Lawrence grad: “There is not another gym in the state of Maine that has the fans on top of you for 32 minutes of basketball. The community believes if they cheer hard enough they can will their team to victory against any opponent.”

Nokomis boys basketball coach Ryan Martin agreed Folsom is a tough place to play, but he also thought of another old KVAC gym.

“Gardiner is an extremely difficult place to play,” Martin said. “The student section under the hoop is something you don’t see in other gyms.”

Carrabec’s gym — dubbed the Cobra Dome — has left several Mountain Valley Conference coaches looking for a way to deal with its infamous acoustics. Longtime Madison girls coach Al Veneziano said his team has played many games at Carrabec in which the noise gave it a tournament-like feel, and Winthrop boys coach Todd MacArthur echoed that sentiment.

“That place is 100 percent all about audio, the way your voice travels in that gym,” MacArthur said. “That’s one thing I always talk about with my kids prior to the game, I’m like ‘You will not hear me.’ ”

The reason is Carrabec’s dome ceiling and surroundings, which have a way of redirecting sound from fans, coaches and players and creating a noisy cacophony.

“It’s so weird, because your voice just travels up and around and it arrives on the front court, over by the stands,” MacArthur said. “It doesn’t travel through the court.”

“You’ll be standing right next to each other and you can’t hear each other because of the acoustics, but you can whisper and somebody can hear it on the other end of the floor,” Hall-Dale’s Richmond said. “I look forward to the crowds up there, but it’s such a tough place to coach and play, just on how it’s designed.”

Adding to the gym’s odd setting is the weight room situated above the court, giving visitors a further taste of the unusual.

“Maybe it’s only my imagination, but it feels like every time we arrive, a couple of massive individuals are ripping bench press sets and grunting barbarically,” Hall-Dale boys coach Chris Ranslow said. “(It) creates a foreign and penal feel. It jogs the Wizard of Oz (imagery), ‘I don’t think we’re in Kansas anymore Toto.’ ”

“Everything’s yellow,” said Bonsant, who has coached and played in the 42-year-old gym. “The lighting is different there. … It’s just kind of weird. It’s really yellow. Unless they’ve changed the lights, it even seems like the lights are yellow.”

The lights have changed, but the presence of black and yellow banners, black and yellow mats on the walls and fans who turn out wearing the school colors give that illusion. That impression was even stronger in the 1980s, when Maranacook had a yellow rubber floor and dimmer lights that made live action look like a 1970s video.

The floor was replaced in the mid-80s and the lights have been changed as well, but Burbank still has an old-school feel.

“The bleachers are the original bleachers. If you walk in here in 1976 and then you walk in here in 2018, you’ll see the same exact bleachers on both sides of the gym,” Maranacook boys coach Rob Schmidt said. “It’s a small gym, it gets pretty tight, there’s not a lot of room from the baseline to the wall. … It’s kind of a cozy gym, I think.”

Every gym can get loud, if the crowd is right and engaged. In Class D, where the smaller schools often try to create suitable gym space out of whatever room is available, finding a basketball court can be a challenge. Think raiding the fridge two days after Thanksgiving. It may not be the best meal, but it will be… something.

Anthony Amero is in his 22nd season as head boys basketball coach at Jackman’s Forest Hills High School. In his two decades coaching the Tigers, Amero’s team has played on some courts that sometimes were smaller than a regulaion court, or really were not basketball courts at all. Windham Christian, a former Maine Principals’ Association member, played on a carpet floor and a Christian rock band would play during timeouts. Waterville’s Temple Academy also had a carpeted court until 2016, when the school installed a plank tile floor and expanded the court to regulation size. In Vinalhaven’s old gym, the teams sat on the stage. Not in chairs on the stage, on the actual stage, and had to hop up to sit down, Amero said.

North Haven’s old gym sported a tile floor, but Amero said that was the easy part.