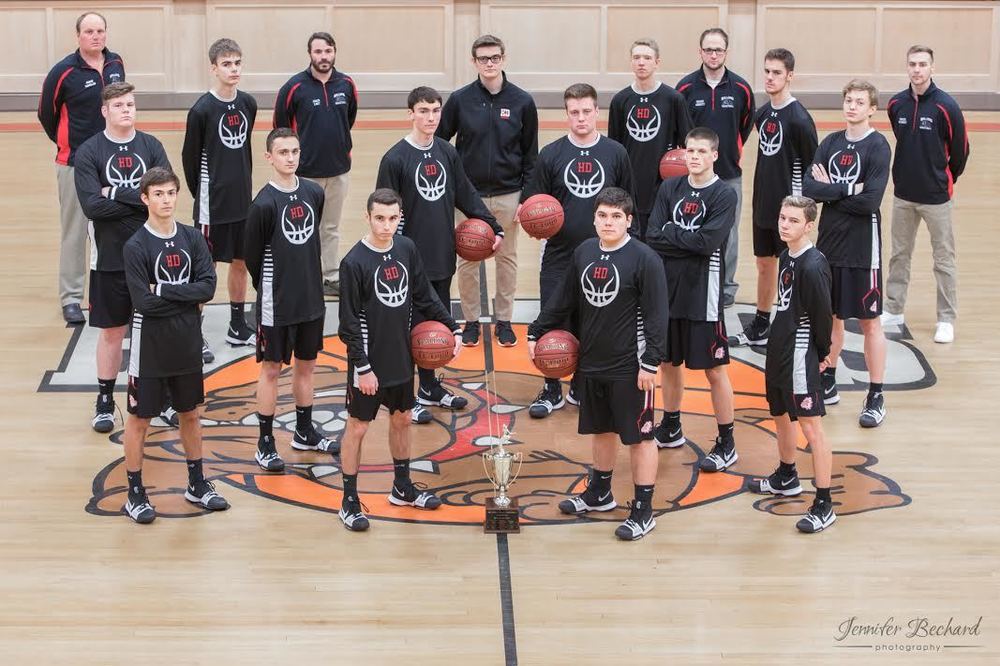 Winthrop was the big favorite in the Mountain Valley Conference two years ago. Hall-Dale took that honor going into last year.

It’s anyone’s guess who gets that distinction this time — though the Ramblers and Bulldogs would be good places to start.

Winthrop's Cam Wood draws a crowd of Spruce Mountain defenders during a Mountain Valley Conference game last season in Winthrop. Wood and the Ramblers look to contend in the MVC this winter as well. Staff photo by Andy Molloy

Both Winthrop and Hall-Dale, the last two champions in Class C South, bring back experienced rosters and proven playmakers, and should have their sights set on a deep run at the Augusta Civic Center — and perhaps beyond.

They’re not alone in the region. Waynflete, Winthrop coach Todd MacArthur said, is “loaded,” while Boothbay and Dirigo are poised for their usual strong seasons. There are also up-and-coming squads — such as a suddenly experienced Monmouth team — that are ready to further muddle the picture.

Perhaps not, but his team comes close. Last year was supposed to be a transition year for the Ramblers, in which they’d feel the blow of losing the top talent from a state finalist team. Instead, Winthrop went 16-5, and even returned to the C South championship game.

Some transition. And this season, MacArthur expects some of the mistakes that tripped up the Ramblers to be ironed out.

“I think our guard play will be much improved,” he said. “We had a lot of turnovers last year that went the other way, and those are the ones that hurt us, if we can’t establish our defense.”

“We have high expectations for ourselves, that we can do some special things,” he said. “But if we ignore the process, those things won’t happen.”

The same goes for Hall-Dale, which rolled to the state final and brings back key pieces from that roster. Senior forward Ashtyn Abbott has blossomed into one of the region’s best all-around players, and senior wing Alec Byron had a good regular season last year and an excellent postseason, being named the C South tournament MVP. Both can score routinely in the mid-20s, and Josh Nadeau will run Hall-Dale’s still-potent show from the point.

Where the Bulldogs took hits was inside, however, and coach Chris Ranslow said he expects the team to need some time to patch the holes.

“We’ll experience a fair amount of growing pains throughout December (and) January, with the expectation of rounding into form by early February,” Ranslow said. “In most situations, I expect that we’ll play relentless full-court defense.”

Madison needs to replace a strong senior class that led it to the regional quarterfinals last season. Guards Justin Stintson and Eric Wescott, as well as forward Jacob Meader, bring the most experience.

“We’ll rely a lot on Eric, Justin and Jacob because they’re the only ones who’ve been on a varsity floor before,” coach Jason Furbush said.

Monmouth has gone two straight seasons without making the playoffs, but the odds are good that brief slide will end this winter. The Mustangs bring back their top scorer in guard Gabe Martin, as well as two quality forwards in Brock Bates and Connor Davies. Senior forward and top rebounder Evan Burnell is out to start the season, but he’s expected back by mid-December.

“Our team seems more together and on the same page so far this year, and hopefully we can keep coming together as a team as the season progresses,” coach Wade Morrill said. “We are hopefully mature and experienced enough to turn the corner and earn a trip to Augusta.”

Richmond turned heads last season, its first in the MVC, but it’ll have to adjust for the huge losses of Zach Small and Matt Rines, who frequently combined for more than 50 points and took the offensive reins in crunch time. It’s a daunting task, but not an impossible one. sophomore forward Calob Densmore impressed in the regional tournament as a freshman, and forward Danny Stewart is a tough player inside.

“This team has potential, but must realize there is no easy way to success,” coach Phil Houdlette said. “It takes hard work to attain success in this conference, (and) there will be peaks and valleys.”

There are new coaches at Carrabec and Mt. Abram. Mike Rowe takes over at Carrabec, where the Cobras reached the preliminary round last season for the first playoff trip in years. Freshman center Ben Clark is the only 6-footer on Carrabec’s roster, so Rowe knows his team will have to out-work most opponents.

Senior forwards Brad Clark and Lucas Murray, as well as senior point guard Liam Serafino, will be leaders on and off the court for the Cobras. At 5-8, Murray plays bigger, Rowe said.

“Murray is a guy that’s going to work very hard to get rebounds. He just does his job. I’d love to have 10 guys like that,” Rowe said.

Former Mt. Blue High and UMaine-Farmington player Dustin Zamboni is the new coach at Mt. Abram. The Roadrunners will look to improve on last season’s 2-16 finish. Senior Jack Deming and juniors Nate Luce and Jackson Masterson will be key players for Mt. Abram.