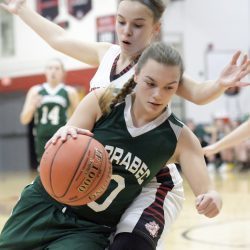 By Drew Bonifant of the KJ

FARMINGDALE — Hall-Dale girls basketball coach Jarod Richmond was confident before the season his team was ready to take a leap forward. On Thursday, his team provided more evidence that he may have been on to something.

The Bulldogs used stellar defense to mount a commanding second-half lead, then withstood a Carrabec rally in the fourth to hang on for a 43-38 victory, their third straight to start the season.

“It showed a lot about the grit and character of this basketball team that we have,” said Richmond, whose team is 3-0 after winning six games over the previous two seasons. “(Winning’s) a skill, and you’ve got to learn it. We’ve got to work on some of the end game stuff. ... It’s stuff we haven’t worked on, it’s stuff we’ve got to work on now.”

There were no stars for the Bulldogs Thursday night, but plenty of contributors. Freshman Averi Baker led with 10 points, while classmate KK Wills had eight. Cat Kincaid had eight points and 11 rebounds, Iris Ireland had seven boards and Grace Begin had six.

“Early in the season, we were ranked 11th out of all the teams in the conference,” said Begin, a senior. “Coming out and constantly proving we’re going to be one of the teams that are going to be big come playoffs is a really good feeling, especially after (the last) four years.”

Carrabec (1-1), led by 11 points and 12 rebounds from Cheyenne Cahill, nearly stole the game with a spirited fourth quarter rally kicked off by 3-pointers by Cahill, Sarah Olson and Ashley Cates, one that narrowed a 38-27 gap with 5:57 to play to 42-38 with less than a minute to go.

The Cobras, however, never fully recovered from a rough third quarter that saw them miss their first 10 shots from the field, a span covering 7 minutes and 31 seconds, and go 1-for-11 from the field altogether as Hall-Dale stretched a 22-18 lead into a 34-21 advantage.

“They’ve got to stop thinking so much, and react,” coach Skip Rugh said. “When they were reacting to what they needed to do, they played good ball.”

The Bulldogs frazzled the Cobras with their defense, a mix of pressure on both ends of the floor and active hands in the halfcourt. Hall-Dale forced 30 Carrabec turnovers, 10 in the third quarter alone.

“(The key is) definitely having really good team chemistry, which is something that we’ve struggled with over the years,” said Begin, who helped lead the Bulldogs’ pressure. “But with these underclassmen coming up and bringing this new excitement and joy for the game and passion, (it) has brought so much life to our team and our program.”

“We’ve talked a lot since the preseason about the dedication to winning the third quarter,” Richmond said. “That’s when you can really swing the balance of the basketball game. We did that, and we’ve done that the last three games.”

Carrabec trailed by as many as 16, and excluding a 3-for-4 spurt to end the second quarter had gone 3-for-36 going into the fourth. With time running out, however, the Cobras found their stroke. The 3-pointers by Olson, Cahill and Cates, respectively, cut the lead to 38-30, and a Caitlin Crawford jumper and Brooke Welch steal and breakaway layup made it 40-34 with 2:24 to go. Ireland (six points) got the lead back up to eight, but Cahill had a putback and Welch later drove for a basket to make it 42-38 with 47 seconds left.

Not about to let the victory slip away completely, Hall-Dale denied Carrabec the rest of the way. Kincaid grabbed back-to-back rebounds of missed 3-pointers to ice the win.

“I could have managed the end game just a little bit better, it’s something I’ve got to get better at and coach the girls up on,” said Richmond, who pointed to free throws as an area of needed improvement. “But ... we want to be a four-quarter basketball team, and I think tonight was the first night we really played four full quarters.”

Rugh said the game, both the rough start and the impressive finish, would help his team going forward.

“We need to put our fourth quarter and end of the second quarter together,” he said, “and not panic.”