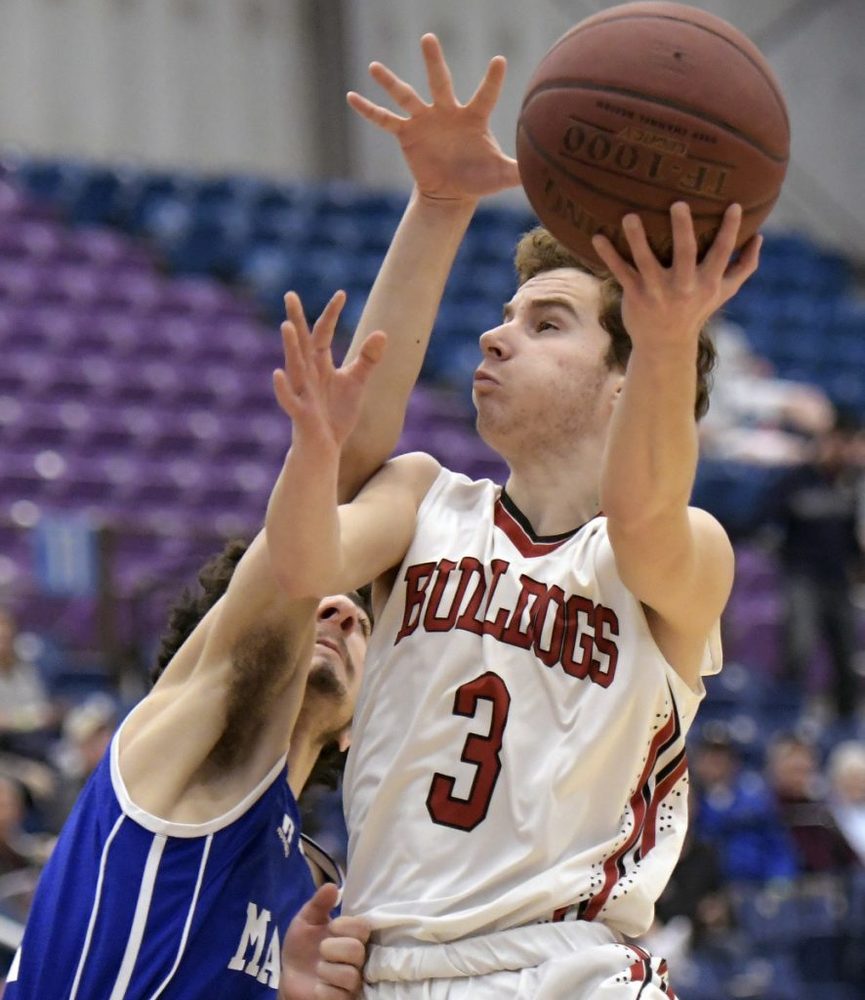 But it was plenty enough for the Bulldogs to make something of a holiday statement on the day after Christmas at the Augusta Civic Center.

Facing a team with a better record for the first time since the 2016-17 season, Hall-Dale came out hot, scoring the first 14 points of the game and 20 of the 24 points in the first quarter before eventually coming away with a 61-33 rout of undefeated Madison.

At least, that’s the story the scoreboard and the stat books told. Ranslow saw the game going differently for the defending C South champion Bulldogs (4-1).

“I kind of warned my group about it. The day after Christmas, everybody’s got kind of a Christmas hangover going on, and I thought we were sluggish,” he said. “It’s good to win, but you can’t judge necessarily how you’re playing against your opponent on any given day. You really need to play against yourselves and your bar and capacity for potential. I didn’t think we were good, we certainly weren’t great.”

He wasn’t alone. Senior Ashtyn Abbott, who led Hall-Dale with 19 points and nine rebounds, had a muted take as well.

“I thought we played well, but not well enough to beat a team like (6-0) Winthrop,” he said. “Beating an (undefeated) team is always good, but we need to step up the intensity. We’re not talking a lot, but we came out with the win.”

And with it, some handy Heal points. Hall-Dale came in sitting 11th in the C South standings, but rose to fourth by beating Madison (4-1), which coach Jason Furbush said received a reality check after beating teams with a combined record of 2-21.

“I’ve been preaching all week to the guys, we’re playing a team like we haven’t faced yet this year,” he said. “A very experienced team like them, and they showed it tonight. They outplayed us, hat’s off to them, they played well, and our inexperience showed a lot at times.”

Madison was pinned from the opening tip. Hall-Dale missed its first four shots but hit 10 of its next 15, opening up a 14-0 lead with 3:07 to go in the quarter and grabbing leads of 20-4 after the first quarter and 40-15 at halftime.

“The speed of the game was much different than what we’ve (seen),” Furbush said. “We can’t implement that in practice.”

Hall-Dale was faster and more efficient. The Bulldogs were 19-of-34 (56 percent) from the field in the first half, and Abbott had 17 of his 19 points and seven of his nine rebounds by the intermission.

“Coming right off of that game against Mountain Valley added some spark to it,” Abbott said, referring to Hall-Dale’s 63-53 loss to the Falcons last Thursday. “Everyone was really energized in the locker room. To come back from that was really good.”

Ranslow said the senior standout’s work in the post and around the basket has stood out so far.

“He’s just more effective and efficient with his body, he doesn’t have a lot of wasted movement,” said Ranslow, whose team also got eight points from Tim Cookson, six apiece from Patrick Rush and Alec Byron and three steals from Josh Nadeau. “I thought tonight he had a couple of duck-in posts where he was able to absorb the double team and then almost kind of step through and split them and score. I think of all of kind of the growth that I’ve seen from him, it’s really from inside of six feet.”

Madison was led by 11 points from Eric Wescott, while Thomas Dean had 10 points and eight rebounds and Jacob Meader scored seven and grabbed 12 boards.

“You’ve got to move forward. We’ve got a tough stretch coming up, which we knew about,” Furbush said. “Those teams that are real athletic, we’re going to struggle with until we get better.”