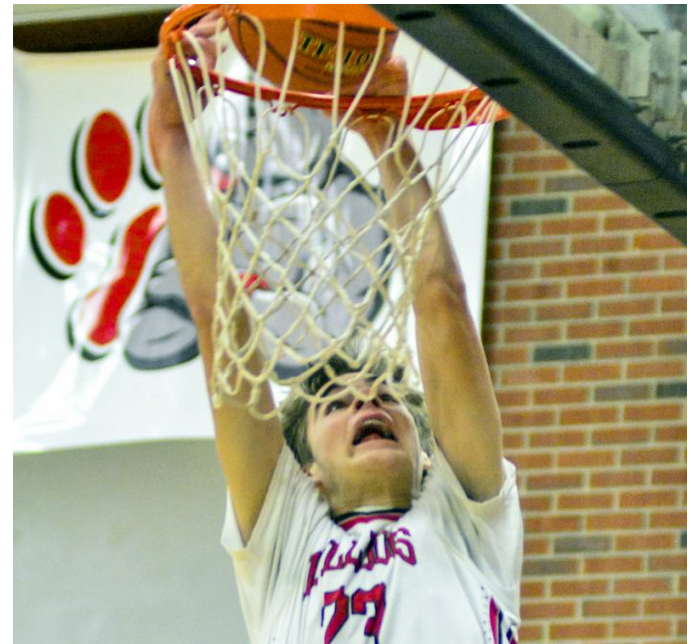 And both proved too much for Lisbon to handle.

Abbott scored 17 points and grabbed 11 rebounds in three quarters of play, Byron added 14 and the Bulldogs rolled to an 80-55 Mountain Valley Conference victory over the Bulldogs.

“I thought we started off great, and that’s a tribute to (knowing) they had the Class B multiplier,” Abbott said, referencing the Heal points value of the win for the Class C Bulldogs. “We talked before the game, we knew this was a big game, and we needed to come out strong.”

Hall-Dale (7-1) did, scoring seven of the first nine points of the game and eventually building a 28-16 first-quarter lead. Lisbon (5-4) fought back, cutting the gap to as few as seven points before the half, but a 13-0 run to start the third quarter made it 50-26 and took any sense of drama out of a game the Bulldogs led by as many as 29.

“I thought that getting out to a lead early and then coming out and firing the second shot there after the half, it kind of launched us into both halves,” coach Chris Ranslow said.

Lisbon was led by 15 points from Issac Burnell and 13 from D.J. Douglass.

“Their size and their speed is just something that’s very tough to match up with for us,” Lisbon coach Jake Gentile said. “We knew at halftime coming out that they were going to come out really hard, and it’s tough. Abbott’s tough, Byron’s tough, (Josh) Nadeau’s so fast, (Patrick) Rush is big. They’re all just really athletic, they get up and down the court, they’re extremely well-coached and they run their system very well. They’re a tough matchup for us.”

Abbott had the Bulldogs rolling early, scoring eight of Hall-Dale’s first 18 points within the first six minutes of play, the last two coming on a dunk that made it 18-10 with 2:45 left in the first quarter.

Lisbon answered with a push of its own, however, trimming the gap to 33-26 on a Seth Tapley putback with 1:04 left in the half, though a pair of Abbott layups put Hall-Dale up by 11 going into the break.

“We came out in the first quarter really strong,” Byron said, “and we couldn’t quite maintain that lead. It was kind of back-and-forth.”

Hall-Dale jumped on Lisbon again to start the second half, and this time it was Byron leading the way. He had the first four points of the half and six of the first eight, helping the Bulldogs take full control for good. Lisbon never got within 14 points the rest of the way.

“What I was most proud of was how we came out in the third quarter,” Byron said. “The first three minutes dictate how the rest of the half is going to, and we came out strong.”

Abbott said both and Byron read the flow of the game to know when to take over on the offensive end.

“We just go with the flow,” he said. “Whoever gets the ball and they’re open, let’s shoot it.”

Even as Abbott and Byron were leading the way, they were getting plenty of help from the supporting cast. Boden Washington scored nine points, while Tim Cookson (seven rebounds) and Caleb Peaslee scored eight points apiece and Patrick Rush (six rebounds) had seven.

“We talk and preach balance,” Ranslow said. “When you’ve got five or six or seven kids that can all score between eight and 10 points, you’re very, very difficult to defend.”

Hall-Dale had an insurmountable lead late in the fourth, but some of the loudest cheers from the bench and the stands came when senior Jacob Penney made a pair of late free throws for his first two varsity points.

“He works just as hard in practice, and it’s so nice and it’s such a healthy display of a team when the starters and the kids that play a lot are up rooting just as hard as everybody in the gym for that kid that sits in the 14th and 15th seat,” Ranslow said. “I broke a smile. I very seldom smile. It was a good moment.”