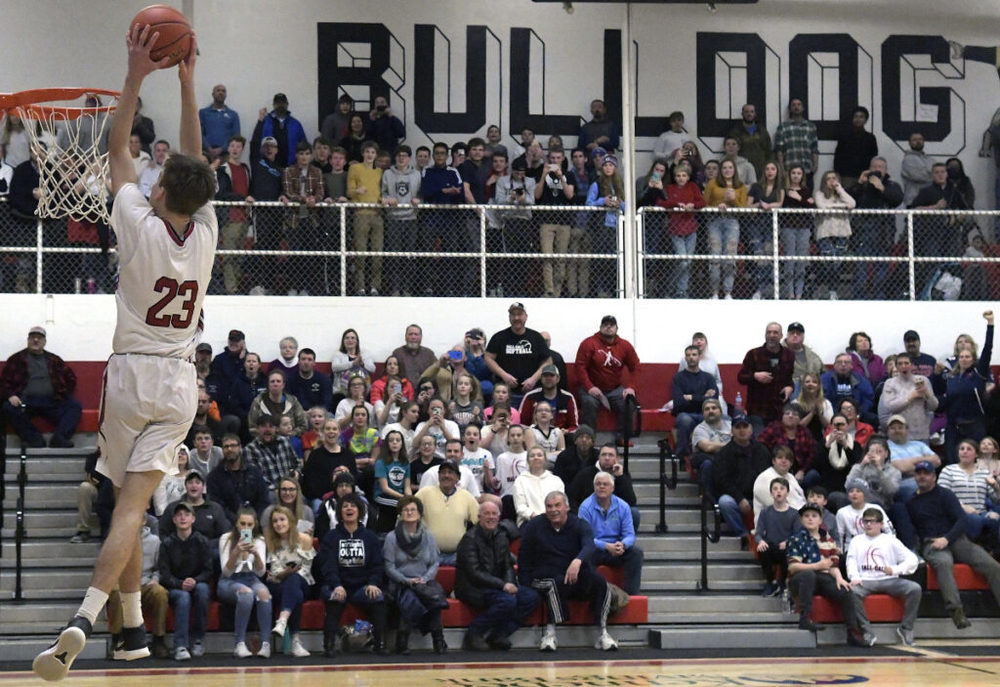 FARMINGDALE — The crowd had been waiting. Ashtyn Abbott made it worth their while.

The Hall-Dale forward gathered a steal, ran down the court alone and threw down a dunk for the 1,000th point of his career late in the first quarter of the Bulldogs’ 73-47 victory over Dirigo at Penny Gym Thursday night.

Abbott became the 12th Bulldog — the eighth Hall-Dale boys’ basketball player and the second in 10 days — to reach the milestone, after teammate Alec Byron scored his 1,000th against Boothbay on Jan. 21.

“It’s a great feeling, especially when you look up and you see some of the names up there and some of the things that they’ve done,” said Abbott, who finished with 18 points and 10 rebounds. “It feels good to join the club. It makes you feel like all your hard work has paid off.”

“It’s an incredible individual achievement,” coach Chris Ranslow said. “It’s something that’s noteworthy, and everybody should be really, really proud.”

Abbott needed only two points for the milestone coming in, and his team had a plan to get him the basket he needed right away.

“We had a play drawn up off the tip for a dunk,” Abbott said. “But they were defending it.”

Hall-Dale’s Ashtyn Abbott, left, is congratulated by teammate Alec Byron, center, and Austin Stebbins after Abbott scored his 1,000th career point Thursday during a game against Dirigo in Farmingdale. Byron got his 1,000th point earlier this season. Kennebec Journal photo by Andy Molloy

Instead, it was clear the Bulldogs weren’t going to force it in to the senior standout just to get the number out of the way. Abbott took only two shots in the first six minutes of play as Hall-Dale took an 8-6 lead, and the crowd noise rose and fell with each time he got, and then passed, the ball.

“The pressure was more… not trying to be selfish with the two points,” he said. “It’s important to me that’s that how it happened. I didn’t want to shoot the ball every time I touched it.”

With just under two minutes to go in the quarter, he got his chance. Abbott poked the ball loose from the Dirigo ball handler, and had no one in front of him as he dribbled toward the basket. Knowing what was coming, the crowd roared, and Abbott made the dunk for the 1,000th point with 1:54 to go in the quarter.

“There’s no other way I’d want to do it,” he said. “That’s one of my favorite things to do, the crowd loves it. It adds an extra layer to it.”

The game was stopped, and athletic director Colin Roy made a short speech while giving Abbott the game ball. Abbott waved to the crowd, then jogged over to give the ball to his father, Ryan, who he called his “hero.”

Byron, who led the team with 23 points, was thrilled to have new company in the club.

“He got that steal, breakaway, and I was so happy for him,” he said. “I was right there to give him a hug. It was just a great moment.”

Hall-Dale’s Ashtyn Abbott thanks the crowd after scoring his 1,000th career point Thursday during a game against Dirigo in Farmingdale. Kennebec Journal photo by Andy Molloy

Even if it took a little longer than anticipated.

“I think there was a little bit of anxiety because he didn’t get it until two minutes left,” he said, “but that was a thunderous dunk that he had. I think his elbow was above the rim… It’s great. I love him.”